WH Bloodstock Off To A Flyer

There’s been much consternation over whether women are given enough chances in the racing world, but striking a positive blow for females in bloodstock is the new consigning team of Mimi Wadham and Violet Hesketh, collectively known as WH Bloodstock.

The pair, both 27, met while on the Godolphin Flying Start course, which has been the launchpad for many a successful career in racing and bloodstock since its inception 15 years ago. 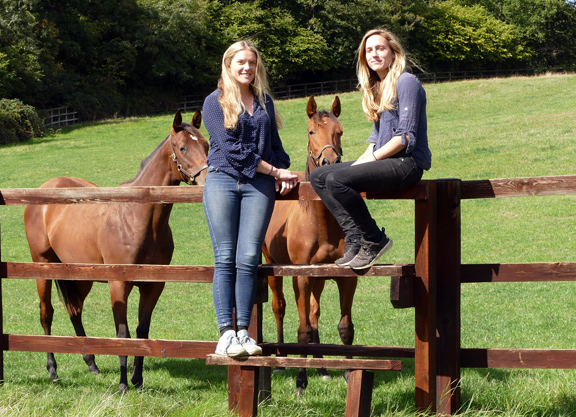 After dismissing early fleeting thoughts to become bloodstock agents, Wadham and Hesketh opted for a different route within the sales world but held off from branching out on their own until they had gathered more experience from different sources.

“We became really good friends on the course and we both had very similar interests. I think we both actually really started out thinking we wanted to be bloodstock agents but I soon realised I didn’t really have the personality to do that and I wanted something that we could nurture and grow,” says Wadham, who spent her formative years eventing and riding out for her mother, the dual-purpose Newmarket trainer Lucy Wadham.

Hesketh, whose twin sister Anna rode on the Flat as an amateur, grew up in a similarly horsey environment and soon gave up on her early ambition to be a jockey when completing a sales season with Ed Sackville at the age of 17.

To augment these early experiences, between graduating from the Flying Start and setting up their own business, Wadham spent two years preparing yearlings at Highclere Stud before completing a stint working for Kevin Ryan in Yorkshire. Hesketh split her time between jobs with Charlie Oakshott and the Chelsea Thoroughbreds racing syndicate before spending the most recent breeze-up season with Roger Marley. As a taster, they also bought their first foals to sell as yearlings last year, consigning them through Oakshott.

“We didn’t know an exact timeframe for when we were going to set up but we started just over a year ago and we’re properly ready now. And then also having our pinhooks do well just spurred us on even more to feel that we can do this now, we’ve got enough experience under our belts,” says Hesketh.

Wadham adds, “We learned a lot from doing it and also a lot about each other. The process is something you don’t experience until you’re right there in the thick of it. I think we came a long way. We made some mistakes, which hopefully we won’t make again. But I think each year you make new mistakes and learn from them.”

The two women appear not just to be good friends but also very much in sync when it comes to selecting horses, as they now do each year for their foal pinhooking syndicate. In fact, they often finish each other’s sentences.

Hesketh continues, “This Lawman filly we’ve got, who I love, she’s going to Book 3, she came out of the stable and we both looked at each other and smiled and we both…”

With four foals bought last year and some extra horses sent by clients, WH Bloodstock has 15 yearlings to consign this year and, as Tattersalls’ October Sale looms, they are almost halfway through. The season got off to the best possible start when their sole Goffs UK Premier Sale yearling, a colt by Tamayuz (GB) out of Lemon Rock (GB), bought for 35,000gns at the December Foal Sale, went on to sell for £110,000 to Shadwell. With five of six sold at the Tattersalls Ascot Sale, they head to Newmarket with a draft of eight.

This group includes the first Book 1 offering by WH Bloodstock, a Showcasing (GB) colt out of the Group 3-placed listed winner Crystal Gal (Ire) (Galileo {Ire}), who is being prepared by them on behalf of his breeders Anthony and Victoria Pakenham and features as lot 316.

“He’s a lovely horse, correct, he walks well, he’s got a great attitude, and the mare was a very talented mare on the track,” says Wadham, who knows all too well how good Crystal Gal was in her racing days as she was trained by her mother. In fact, all three yearlings consigned by WH Bloodstock for the Pakenhams this season are out of mares trained by Lucy Wadham. The second of these in the Tattersalls draft is the Warwickshire Oaks winner Cassique Lady (Ire) (Langfuhr), whose Mazameer (GB) colt is lot 1827 in Book 3.

“The Pakenhams have been a fantastic support to us both,” Wadham continues. “I mean, to give us horses at all, but to give us a horse of the calibre of the Showcasing colt for our first year is, well, we’re just really, really grateful. I just hope that we can have a good sale for them.

“I think Crystal Gal is going to be an exceptional broodmare. She’s already bred two very smart Sir Percy fillies, and it’s their temperament which sets them apart. They’re so laidback and this colt’s the same. Nothing fazes him. He just sleeps and eats, he’s a dream.”

Among the team working for WH Bloodstock at Hollington Stud, set deep in shaded country lanes on the Berkshire-Hampshire border, is Harry Wigan, a recent graduate of the Irish National Stud course whose father James regularly tops the Tattersalls Foal Sale with his West Blagdon Stud draft. Once the yearlings have been sold and next year’s batch bought at the foal sales, Wadham and Hesketh plan to turn their hand to a spot of breaking and pre-training.

“It’s very seasonal, of course, so we’re working with the facilities we’ve got here, and the experience we both have. We’ve both done some breaking, and we’ve got a gallop, a nice school, a walker and lunge ring, good barns. We’re so close to Lambourn and there’s a great demand for breaking and pre-training so we thought it was a good way to keep the business rolling,” Wadham explains.

Hesketh adds, “It’s very humbling, the support. So many consignors, or people we’ve worked for, call us or we can call them anytime to ask them any questions. Everyone seems to want to help us out which is great. It’s a really nice feeling. We’re actually very touched by how many horses we got to start off with, and we had only insured for a certain number so we had to ring Weatherbys and say ‘actually we’ve got quite a few more horses than we said we were going to have’.”

Consistency is the hallmark for good sales drafts and early signs have certainly been promising for WH Bloodstock. A solid start has been made. It surely won’t be long before they’re flying.