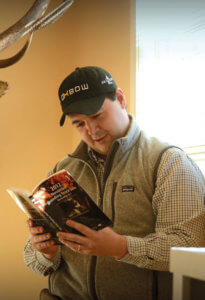 Leif Aaron joined Taylor Made Sales Agency in Lexington, Kentucky, directly out of Godolphin Flying Start as a Stakes Filly Recruiter. His primary role was to recruit high-end fillies and mares off the track for Taylor Made to consign at public auction and during Leif’s time of employment the transactions he was involved in include the sales of G1 winners Joyful Victory, Blind Luck, Evening Jewel, Willa be Awesome, Home Sweet Aspen, G1 Breeders’ Cup Filly & Mare Sprint winner Dubai Majesty, as well as the record-setting sale of Horse of the Year Havre de Grace. In 2017, Leif joined Juddmonte where he was the Stallion Nominations Manager until January 2022 where he joined Fasig Tipton as Digital Sales Director.