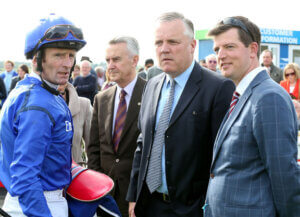 When he graduated Godolphin Flying Start in 2007, Gerry Duffy joined the nominations team of Darley USA. He spent four breeding seasons in this role while also studying for his MBA at the University of Kentucky. In November 2011 he took up the role of Stallion Seasons Director at WinStar Farm, during which time the farm grew from a 14 stallion operation to 22. Gerry completed his MBA in May 2012. In 2013, Gerry Duffy returned home to Ireland after six years in the USA to take up the position of General Manager of Godolphin Ireland. Alongside Godolphin’s Joe Osborne and Jimmy Hyland, he was responsible for the running of Godolphin’s seven Irish farms, an all encompassing role. In 2018, the opportunity to take over from Bobby Spalding at Godolphin’s Kentucky-based Stonerside Farm arose and Gerry moved back to the US with his family where his is now Stud Manager. Gerry is also actively involved with Godolphin Flying Start and was the winner of the inaugural Alumni Award for Leadership Excellence in 2015.