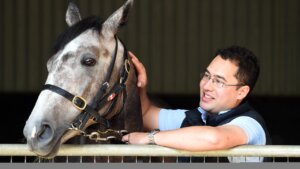 Brian McGrath is a trainer in Melbourne, Australia and graduated from Godolphin Flying Start in 2010. His early career involved working for John Hammond’s stables in France, followed by stints with the late Michael Jarvis and Roger Varian at Newmarket, before becoming Assistant Trainer to Eve Johnson-Houghton where he spent two years.

He then headed to Australia and worked for Robert Smerdon and Chris Waller before branching out on his own in 2015.