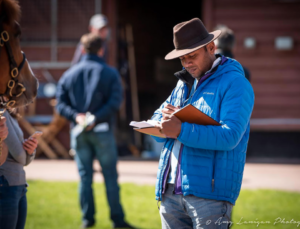 Ajay Anne is the Managing Director of Dubai based New Approach Bloodstock. Ajay’s first job after finishing Godolphin Flying Start was to support in the setting up of the Darley Dubai office where his role was to assist Darley clients visiting Dubai. During this time he was also involved in promoting Darley bloodstock in the Middle East, India and South Africa. Ajay’s signature success during this time was in selling Noverre to India, after which the stallion sired the winners of the G1 French Derby, G1 German Oaks, G1 Beverley D, G1 Falmouth Stakes and in his first crop in India produced two G1 winners. More than 75 Darley mares were sold to India between 2006 and 2010. Ajay launched his own bloodstock company, New Approach Bloodstock, in 2010. Ajay considers Planteur his “big horse” after starting his own company. Planteur was the first horse Ajay purchased for the G1 Dubai World Cup and finished third in both the 2012 and 2013 editions of the race, as well as placing third and second in the 2012 and 2013 renewals of the G1 Prix d’Ispahan. Other G1 winners Ajay has purchased for racing and breeding purposes include Meandre, Compasivo Cat, Crisp and Midnight Interlude. Ajay has been a Licensed Stipendiary Steward with the Emirates Racing Authority since 2006.