THERE was high drama before the running of this recognised Classic trial as favourite and Investec Derby entry Epicuris was withdrawn at the start after refusing to enter the stalls.

All eyes were on last year’s Group 1 Criterium de Saint-Cloud winner who was looking to get back on the Classic trail having suffered a shock defeat at Longchamp on his comeback last month.

However, having been on his toes in the paddock, the Khalid Abdullah-owned Epicuris became increasingly coltish at the start before digging his toes in the Saint-Cloud turf and refusing to participate.

His withdrawal left the door open for Sumbal (Francis Graffard/Andrea Atzeni), owned by Qatar Racing and who had been supplemented for this Group 2, to maintain his unbeaten record with the minimum of fuss.

With just three runners left to contest a race that has produced a winner of both the Investec Derby and Prix du Jockey Club over the last four years, outsider Kouros Jelois set the fractions with Sumbal second and Godolphin’s Untold Secret a close last of the trio.

Sumbal, who holds an entry in the King Edward VII Stakes at Royal Ascot, was always travelling sweetly for Atzeni and moved effortlessly past the leader turning for home.

He was momentarily joined by Untold Secret, who sneaked through on the rail, but his bid for glory was short lived as Sumbal powered to a first win at Group level by an easy six lengths at revised odds of 2-5f. 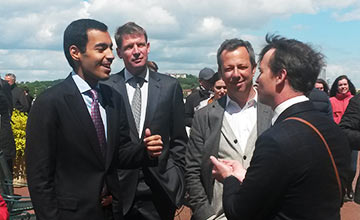 Victory appears to have earned Sumbal a trip to Chantilly for the French Derby and David Redvers, racing manager to the winning owners, said: “We’ll discuss it but to have done that as easily as he has you’d have to think he is a Group 1 horse and go for a big target.

“Andrea said that Sumbal made that [very soft] ground feel like good ground. He has a bit of a knee action so you probably wouldn’t want to run him on firm but I don’t think he needs it that soft.

“It [Prix du Jockey Club] is the obvious place to go. We will discuss all the options. He isn’t in the Derby but Epsom is a big race in our year. We’ve got Elm Park in that and I suspect it makes sense to keep them apart.”

A number of bookmakers pushed Epicuris out to 33-1 for the Derby after his pre-race antics. According to trainer Criquette Head-Maarek, Epicuris could bid to redeem his reputation as early as Sunday in the Prix Hocquart at Longchamp.

She said: “We will do a stalls test on Friday at Chantilly and we will see afterwards. The problem is that I will have to declare him for the Hocquart Friday morning. Obviously if he doesn’t pass his stalls test he can’t run.

“He’s intelligent but he isn’t mean-spirited. He just plays around. We tried a hood on him at Chantilly and he reared up and pulled.”