Why young trainer Reynier looks destined for the top 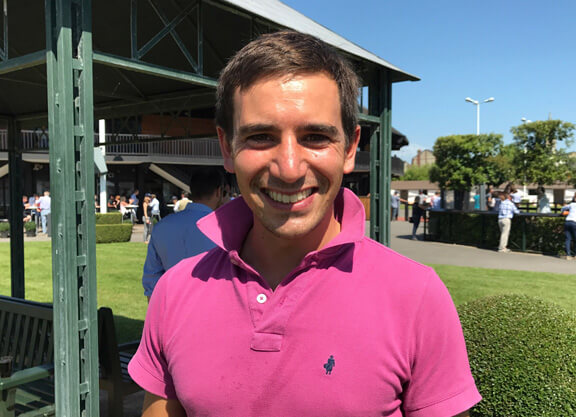 While the likes of Charlie Appleby, Brad Cox, Wesley Ward and Yoshito Yahagi were dominating the headlines at the Breeders’ Cup in California over the weekend, over in Europe a so-far lesser-known trainer was providing yet more evidence that he may have the potential to be ranked among them before long.

The ten-furlong Premio Roma at Capannelle, Rome, a race with a rich history dating back 110 years, maybe only a G2 these days, but it is still one of the most prestigious weight-for-age contests in Italy, and winning it on Sunday (see video below) with one of his stable stars, the grey Skalleti, capped an outstanding year for young French conditioner Jerome Reynier.

Reynier, who is based in Marseille in Southern France, has no family background in racing, but his talent has become more and more apparent over the past couple of seasons. He is already as high as world #26 in the TRC Global Rankings, making him the third-highest France-based trainer, behind only Andre Fabre (#15) and Jean-Claude Rouget (#21).

That lofty position is due in no small part to his finding a way to get the best out of two 6-year-old geldings, Skalleti and Marianafoot, who have won three G1s between them this year. They are both owned by owner Jean-Claude Seroul, who plays a key role in the Reynier story.

Marseille-born Reynier is the son of an architect. “Racing was my father’s passion,” he says. “He had a few horses with trainer Henri Rossi and was lucky with some. That kindled an interest in me to read up a lot on the subject.

“My parents split up when I was 12, and my father’s involvement in racing was a major factor. It didn’t affect my interest in the sport, though, as my father moved to Deauville and took me racing and to the sales.”

After leaving school, young Jerome knew he wanted to work with racehorses. “I spent a breeding season with Coolmore, then a similar time at the Irish National Stud,” he says. “The aim was to learn about the bloodstock industry and improve my level in English. I was then accepted for the Darley Flying Start program.”

After the 2-year course, Reynier became a bloodstock agent briefly but soon realised it was not for him. “I was losing the direct contact with horses, so I decided to get my trainer’s licence in France. I spent some time with Neil Drysdale in the States and Darley in Dubai to get an all-round experience of training.”

He adds, “I started out as a private trainer in Marseille for the Ecurie Camacho in September 2010, with just five horses. Three years later, I had 21 after receiving my training licence from France Galop.”

Skalleti (left) gets the better of subsequent Arc winner Sottsass in a G3 at Deauville in August 2020. Photo: John Gilmore

Reynier has never looked back, with winners and prize money steadily increasing every year. In his first season in 2010, with just five horses, he won three races and total prize money and premiums of €65,391. Last year, with 98 horses, he won 85 races and €2.3 million.

At the end of October, he stood seventh in the French trainers’ list for 2021 with 73 wins and €2.6 million – not bad for an operation based so far from the main Parisian tracks and Deauville.

“I was born in Marseille and love the place,” he says. “We have great training facilities with both turf and sand tracks at Cabries.” The quality of horses is certainly improving in the area, with Frédéric Rossi [another successful French trainer] also based there.

Reynier says, “It was tough at first to get started, but I began to have a few winners, which attracted increasing numbers of owners.” In those early days, he was something of a jack of all trades. “I used to do everything – training, driving the horses to the various racetracks and so on – but now it’s different. I have always loved what I do.”

Reynier’s big break came in 2018, when Seroul asked him to train for him. “The year before, he told me I was too young. Then a year later he came back with 50 horses, which I train in a separate yard from the other 40 for my other owners.”

Reynier believes in a patient approach. “I am not too tough with my horses, preferring to take my time developing them, which suits Jean-Claude Seroul as his horses are aimed at starting as 3-year-olds.

“I generally like to give my horses a 4-week break between races. I would be happy whether I had 90 horses or ten. This job is always a pleasure, going round early in the morning and looking at all the horses. Every day is different. But I couldn’t operate without my wonderful staff. Most have been with me for sometime.”

Reynier has 16 staff working in the Seroul yard and 12 in the other one on a full- or part-time basis.

​​Marianafoot is a classic example of how the 4-week break system has been working out.

The 6-year-old climaxed the year with victory in the G1 Prix Maurice de Gheest at Deauville in August. It was the son of Footstepsinthesand’s eighth successive win in eight months, with at least four weeks between each outing.

The horse sustained a joint injury after finishing second at Doha in February 2020, but after a long lay-off came back better than ever. “After the injury we took our time for Marianafoot to properly recover, and he came back fresh,” says Reynier.

“I think he has always been a good horse, and racing each month from last December [up until the Maurice de Gheest] with light work between races has been a main part of his training to maintain his form, and gradually bring him up to Group 1 level.”

Skalleti, a 6-year-old son of Kendargent, has won five races this season, including two G1s – the Prix d’Ispahan at ParisLongchamp in May and the Prix Grosser Dallmayr-Preis-Bayerisches Zuchtrennen in Munich in July – as well as the Premio Roma.

Marianafoot, meanwhile, is finished for the year and will come back fresh for next season. “He has had a busy campaign and the ground was too soft on Arc weekend so there was no point in running him again this year,” indicated Reynier.